The trip in detail

We`ll start our day together with a guided tour of Lima’s historic center, including the Plaza de Armas, Cathedral, Archbishop’s residence, the Presidential Palace and the Church of San Francisco and its famous catacombs. We’ll have an earlyish dinner and then head off for a very special treat– el Circuito Magica de Agua (the magical water circuit): a dozen different interactive fountains and a laser light and water show set to an inspiring soundtrack ranging from Abba to Tchaikovsky – a genuinely impressive spectacle.

Late this morning we’ll drive for an hour across Lima to Mamacona Beach, where we’ll see caballos de paso (dancing horses) perform – this balletic display is unique to Peru and is one of the most striking sights you will see here. After a buffet lunch of traditional criolla (coastal) food, we’ll head to nearby Pachacamac, an important pre-Inca ruin. Late this afternoon we’ll wander through Barranco, one of Lima’s most charming old beachside neighbourhoods, and enjoy dinner there.

Guayaquil is not only the beating commercial heart of Ecuador but is a vibrant sprawling city growing ever more confident. A half-dozen or more high-rises give it a big-city profile and several hillsides are engulfed by shantytowns, but it’s the city`s riverfront town known as Río Guayas, that defines the city’s identity. We`ll take a tour today during the afternoon to explore the city.

Learn where chocolate comes from at Hacienda El Castillo, where as well as growing and processing chocolate, they also protect flora, fauna, and many species of birds.
Then it`s on to the Galapagos Islands for an unforgettable experience. Our accommodation for the next four nights will be aboard the cruise ship Galapagos Legend.

Fly from Guayaquil to Baltra Island and board the ship and head for Santa Cruz Island. Visit Eden Islet where we’ll see a variety of wildlife including reef sharks, blue footed boobies, mustard rays and marine iguanas. Then we go to Bahia Ballena (Whale Bay) with its characteristic green volcanic sand and population of turtles (Snorkelling available).

Today we head for Isabela Island, which was formed by volcanic activity and is home to five active volcanoes! Our first stop is Moreno Point (snorkelling available), where we’ll see an impressive lava flow and several species of pioneering plants. Brackish ponds here are home to moorhens, pintailed ducks, frigate birds, pelicans, flamingos and pied bill grebes. Next is Elizabeth Bay where we’ll take a dinghy ride to hidden lagoons that are home to sea turtles, rays and penguins.

Today we’ll visit two more of Isabela’s incredibly diverse bays. At Tagus Cove (snorkelling available), where early explorers painted the names of their ships on the rocks, we’ll observe Galapagos penguins, flightless cormorants, pelicans and boobies. At Urbina Bay, which was formed as recently as 1954 by an uplift in the seabed, we’ll see flightless cormorants, pelicans, penguins, blue-footed boobies and marine and land iguanas, rays and sea turtles.

This island is the most remote and untouched of the Galapagos Islands - there are no introduced species’ here – as well as the most volcanically active. The volcanic landscapes are very impressive and interesting. Fernandina is also home to the largest concentration of marine iguanas in the Galapagos, as well as sally lightfoot crabs, flightless cormorants, sea lions, penguins, lava lizards, hawks, and mangrove forests. (Snorkelling available)

We'll visit the dry, arid highlands of Santa Cruz Island on the way to fly back to Guayaquil. Then we head back to Lima to continue exploring Peru!

A short flight takes you from Lima to Arequipa where you will enjoy a free afternoon to explore the city. Arequipa is a grand and splendid city, guarded by three dramatic volcanoes, full of baroque buildings grafted out of the local white volcanic sillar rock, rich in culinary delights, and replete with historic significance.

Today is a long, full day with early start and a four hour drive each way to explore the world’s second deepest canyon, best known as a place to spot Peru’s national bird, the majestic Condor. We get up very early to drive here as the best time for spotting condors is soon after dawn.

Arequipa is a stunningly beautiful city due to being largely built of a luminous white stone called sillar. The Monasterio de Santa Catalina, its most famous tourist attraction is like a walled city within a city, an amazingly colourful and atmospheric colonial citadel with a rich and fascinating history.

Puno is a region and province in south-eastern Peru. It is located at the edge of Lake Titicaca, the world's highest commercially navigable lake, at 3,860 m (12,421 ft) above sea level, on the Peruvian Altiplano. Puno is an important agricultural and livestock region of Peru; particularly of South American camelids (llamas and alpacas) which graze on its immense plateaus and plains.

First we visit the Uros Islands, half an hour out of Puno: better known as the Floating Islands, the islands are entirely manmade, woven of totora reeds. Next we chug across the lake for a couple more hours to Amantani Island, where we'll meet our hosts, members of the indigenous Quechua community. Tonight we take in the world’s best sunset - over the rippling water, mountainous islands, and crinkly shoreline of Lake Titicaca – from the Pachamama (Mother Earth) temple at the island’s summit. After dark we'll return to our family homes. There are no cars or roads on Amantani, and even dogs are forbidden, so the silence after nightfall is complete. This must be one of the most peaceful places in the world.

In the morning it’s a short (45 minute) trip across the lake to Taquile, a stunningly scenic island that is famous for its textiles; we’ll see them on the people, learn about their significance, and have the opportunity to buy them in the island’s co-operative shop. In the afternoon we’ll head back to Puno.

This morning we’ll explore Lampa. In colonial days a thriving metropolis, Lampa is now a forgotten gem where llamas wander through the main square, past pink stone buildings and the most amazing church we’ve ever had the privilege to visit. Among many other marvels, it houses a collection of hundreds of skulls and skeletons, artistically arranged in a marble crypt – it’s quite a jaw-dropping sight. We spend the afternoon driving (3.5 hours approx) to the small village of Raqchi where we’ll explore the enormous ruin of the Temple of Wiracocha –one of the most important in the Inca Empire – and stay in the guestrooms of family homes.

This morning you have the choice of a guided walk through the surrounding countryside to scenic lookouts and an extinct volcano, or taking part in Raqchi’s main industry – ceramics - trying your hand at the potter’s wheel in a backyard pottery studio. Then we’ll head for Cusco the incredibly elaborate colonial church at Andahuaylillas, and lunch in the South Valley, which will be delicious, filling, and a very enjoyable glimpse of real local life.

Today we’ll have a day’s guided tour of the highlights: the beautiful Plaza de Armas, the Inca temple of Coricancha, the Museum of Folk Art, and the Inca Museum (two favourites of dozens of museums).

The oldest continuously inhabited city in the Americas and its undisputed archaeological capital, Cusco boasts enough museums, churches, and ruins to make your head spin. There’s also shopping, cafe-hopping, and plenty of wandering to be done. We can also help organise activities such as biking, rafting, salsa lessons or a relaxing massage.

It’s a short (half hour) flight from Cusco to Puerto Maldonado. From here we take an outboard canoe 45 minutes up the Tambopata River to Posada Amazonas lodge. After lunch and an orientation talk, we’ll take a twenty minute walk to the 30 meter scaffolding canopy tower. A bannistered staircase running through the middle provides safe access to the platforms above. From atop you obtain spectacular views of the vast expanses of standing forest cut by the Tambopata River winding through the middle. Now and then toucans, parrots or macaws are seen flying against the horizon, or mixed species canopy flocks land in the treetop next to you.

Today we’ll visit an oxbow lake where with luck we’ll see giant river otters playing in the water near our catamaran. Next we’ll see Mealy, Yellow- headed Amazon and Blue-headed Parrots descending to ingest valuable nutrients from a riverside clay lick. In the afternoon we’ll take a guided walk where we’ll learn about medicinal plants. After dinner we’ll take a walk in the dark– most Amazon mammals are active at night.

We retrace our river and road journey back to Puerto Maldonado and fly to Cusco . We’ll have lunch together and in the afternoon you can rest, explore by yourself or join us on a walking tour of central Cusco.

Chinchero’s Inca ruin is impressively terraced and the colonial church built on top of it is our pick for Peru’s most charming. Chinchero is also a good, un-touristy place to check out Peru’s famous traditional weavers and weavings. Moray is a complex of three massive terraced amphitheatres of incredible engineering precision, believed to have been an agricultural laboratory where Inca agronomists experimented with planting crops at different altitudes and angles to the sun. Finally we’ll explore spectacular, surreal Salineras - a still-working Inca salt factory that is even more beautiful than it is interesting.

A new Wonder of the World that needs no introduction. We’ll have a guided tour, plus plenty of time for personal exploration of the massive site.

iny, charming Ollantaytambo is said to be the most perfectly preserved of all Inca towns. It’s a maze of atmospheric cobbled alleyways and elaborately carved stone irrigation systems, presided over by a spectacular, llama-shaped ruin. The sunny, photogenic floodplain between Pisac and Ollantaytambo in the valley of the Rio Vilcanota is known as the Sacred Valley of the Incas. You’ll soon see why the Incas rated the Valley so highly – its spring-like climate and gorgeous scenery made it a popular weekend getaway for Cusco’s aristocracy. This area once supported a large population whose industry and innovation helped feed an empire, and its history of intensive cultivation is evident everywhere in agricultural terracing and complex, still-working irrigation systems. Another well-preserved Inca town, Pisac is home to a massive market that is the perfect place for souvenir and gift shopping, as well as an Inca fortress that is probably the most impressive ruin after Machu Picchu.
Tomorrow it`s a flight to Lima and on home. 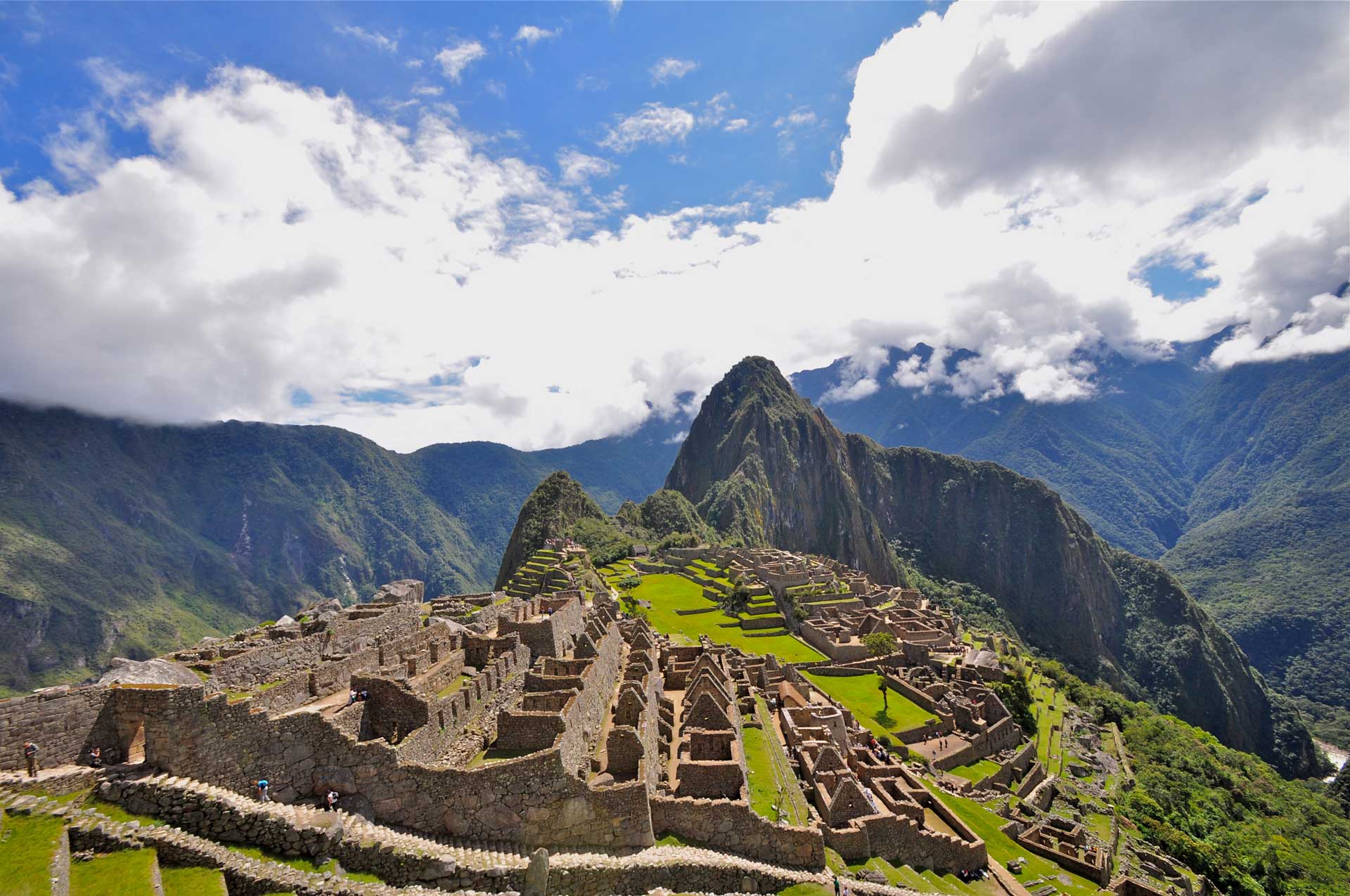 How much does this trip cost?

which was for a group of 20 people

Check out all our adventure tour itineraries and find groups of like-minded people to share them with. Have us create your own private and/or custom tour. Whatever you’re looking for, we’re here to make it happen!